Well I think at my forth attempt, I got it down. I have my Chuck Jones timing and exaggerated expression, my focus and style.

"A Character Animated Short with an emphasis on comic timing and exaggerated poses that showcases the humorous relationship between a retired superhero and his dog in a cartoon style."
No comments:

This is my first attempt at writing the script. I’ve been trying to ruff the timing out since I’m still flushing my story out.

This is my forth revision to my story synopsis for the retired superhero idea. In this version, I'm trying to make my message clearer. I'm still working on the gags to flush them out. I need to figure out what Fang forgets. I'm also still undecided about what kind of superpower Nigel will have. I'm thinking of laser vision, creating fire, creating water being elastic. Two scenarios I was thinking of is a flood, where Nigel can laser beam the water and it turns into a mist. I was also think of a meteor shower were Nigel could either break apart the meteor with his laser vision or he could freeze the meteors with his ability to create water. I'm also thinking of a bolder falling and Nigel can stretch his arm out to catch it.

This is my first attempt at writing the treatment. The “reel” audience that my project is geared towards is kids. My Intended Audience” would be geared toward industry professionals, CADA facility and students.

My story synopsis for the retired superhero idea. In this version, I'm trying to flush out my ideas and consolidate the story to focus on one conflict.

Revised Outline:
Narrowing down my Outline to what I want the focus of my Thesis to be on. 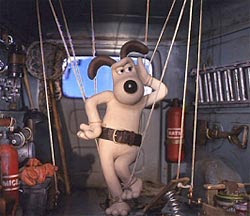 Reference for the Color - These are samples of the colors I would like my Thesis to have. The use of bright primary and secondary colors really appeals to me. I also want my thesis to have a fun feel, and I think using colors like these will add to that. 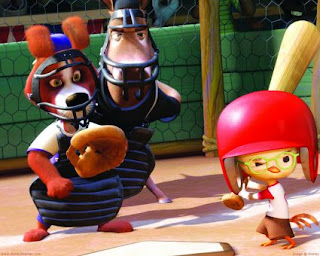 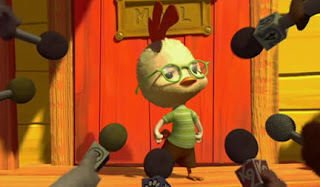 Well I got some feedback in class and my last version was too specific. Here's my third attempt.

"A Character Animated Short with an emphasis on comic timing and exaggerated poses that showcases a superhero’s inner struggle with his duty to serve his community after retirement in a cartoon style."
No comments:

My first Attempt at a Thesis Outline - Boy it's beginning to seem like allot to do.

Attempting to revise my thesis statement has been more difficult than I thought. I know what kind of short I want to do, but now I need to get the exact words to match it. This is what I came up with when using my Professors formula- Use 3D Character Animation to visualize the inner conflict of the Nigel in a cartoon style.

"A 3D Character Animated Short showcasing Nigel’s inner struggle with his duty to serve his community after retirement with the help of his trusted sidekick Fang while being executed in a cartoon style."
No comments: 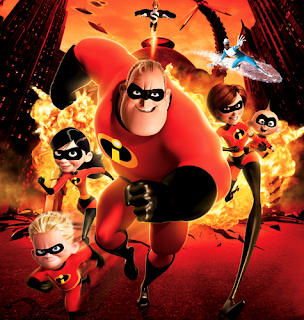 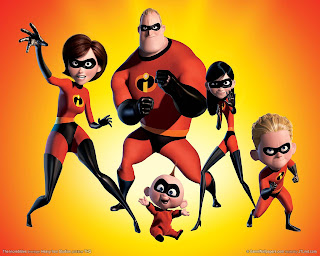 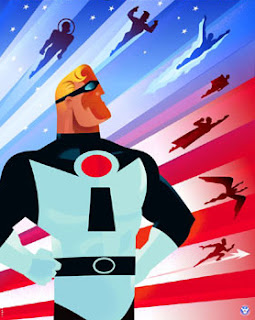 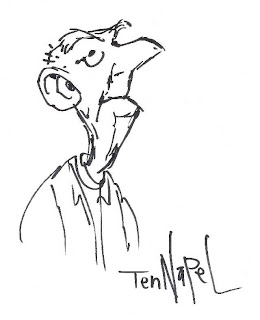 Inspired by the color design 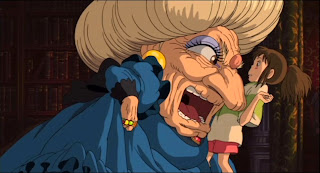 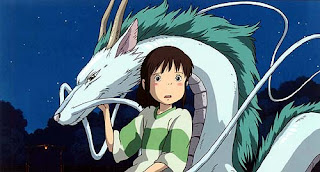 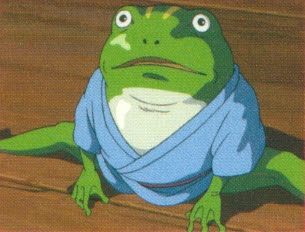 Reference for the Old Man - Geri has great Character Expression also I want to achieve this physical body language in my character. I just love this short, it’s one of my favorites. 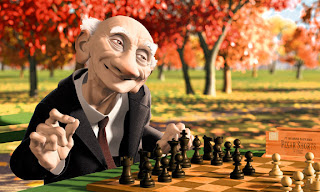 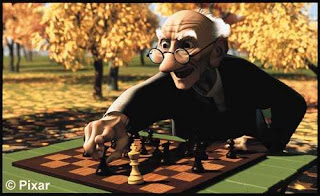 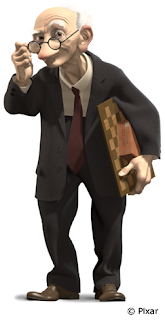 I came across this sculpture after my story idea and this was exactly what I had in mind. This is the idea/image that I was trying to get across 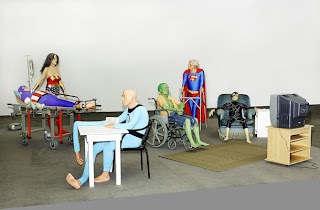 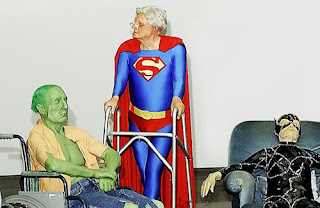 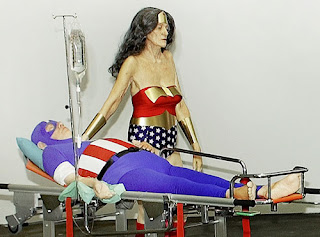 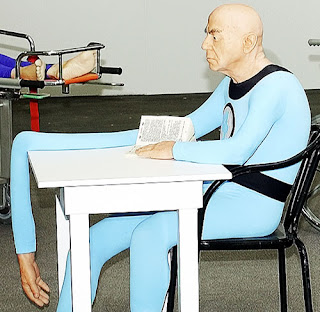 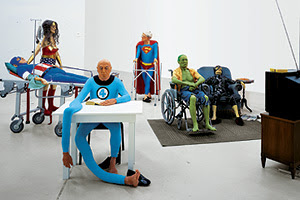 Well this is my first attempt at a Thesis Statement. I want to do a Character Animated Short with characters that I can exaggerate their expressions and poses. I also want to work on the timing. I've always loved Chuck Jones timing and would like to mimic something like that.

"A Character Animated short with a Chuck Jones style of comic timing and exaggerated squash and stretch produced by computer-generated imagery."
No comments:

Well I narrowed my story ideas down to three. I want a story that I feel works well, but also one that I won’t get board working with being I’ll be working on it for a full year. Here are
my story synopses for three different Ideas I have:
Do superheroes retire?
A dog that needs a home.
A boy that feels he doesn’t belong.

Well this summer my plan was to come up with and idea for my thesis short before class started. So I walked around everywhere I went with a notepad and anything that inspired me I wrote it down. I even made sure that I if I was watching a movie or TV show that I had my pen and paper with me. By the end of the summer I had a book full of ideas. These are some that I felt I might be able to go with.

1) Do Superheroes Retire? Showing the struggle of an old man with physical challenges still trying to help to save the day, even if it’s just for a cat stuck up in a tree.
2) A boy that feels like he belongs in the city but is raised by farmers: A Skateboarder type of kid is raised by farmers. He hates living on the farm and one of his daily chores is to get fresh milk for breakfast. Show how the kid struggles to get milk from the cow.
3) A dog needs a home: A young boy is fishing and a stray dog spots him. The dog decides to swim under water so that the hook gets caught on his collar, which it does. The boy has no interest in the dog until he realizes that the dog can catch fish too. Now the boy can bring home twice as many fish.
4) Boys imagination gets the best of him: Show a boy with a newspaper pirate hat on and a wooden sword. He’s battling play mobile type characters on a pirate ship. We hear his mother call him and the boys in the bath. Show the reaction of the toys as the water draining effects the ship.
5) Is Technology Better? Show two guys mowing their lawn. The older man has a push mower and the younger one has a high tech mower. Play with the gag that the newer mower won’t even start. Show that the push mower, older guy is done before the young guy with the newer mower even starts.
6) Strongman – Show the strong man game at the carnival. A muscular guy comes up with his girl and scores on the game pretty well. Than a nerd walks up and hits the base and the ball shoots up and knocks the bell off the stand. He looks surprised; the audience sees that the strong guy has loosened the screw. The girl walks off with the nerd.
7) Inside a Bee Hive -Bear going into a Beehive, show how the bees live. Bees are at work and the bear is taking their honey. The Bees become angry and begin to chase after him, and the bear runs. The bear as to get ride of the bees.
8) Tin Dog and Cat Fight – A tin dog is outside and it begins to rain. The tin cat locks him out. Play with the dilemma of the dog trying to get inside before he rusts.
9) Angus- Bully / underdog story: Angus is the worst player on the baseball team and Bruno is the Bully. Angus is at bat and strikes out twice, the third time he actually hits the ball. He’s never done that before and is now unsure what to do and starts to run in the wrong direction.
10) Angus Dunk Tank - Bully / underdog story: Take off of the one above, except Angus is practicing his throwing to get back at his revile. Bruno will be at the local carnival in the dunk tank with the baseball team. Angus plans on dunking him.
11) Gopher – A gopher is obsess with golf balls and lives on a golf course. The golfers keep getting annoyed that their balls disappear. Caddy Shake like. The Golfers see the gopher and try to blow up his house/hole.
12) Ant Farm – Nerdy Boy loves his Ant Farm. Mom starts to vacuum, he takes one of the ants out to play with it and it falls on the floor as the mother is coming down the hall to vacuum his room. All the other ants gather together to save the ant.
13) Crowded Subway – A man is waiting by the subway. As the train pulls up he is first on line. As he goes to enter the train, he gets stampeded and flattens out as the crowd walks over him.
14) Car – How does a car feel? Show the emotions of a car, from being made, to the first time being bought, to the junk shop, to being restored.
15) Fish - The fish has to live in our world with a fish bowl around his head, he never fit in. On day the world is about to end and the fish has to go into outer space to save earth.
16) The Grimm Brother Fairy Tales - Hansel and Gretel
17) The Grimm Brother Fairy Tales - The Fox and the Cat
No comments:

The start of my NYU Thesis - More Inspiration: